The Baby Shower – What a Glorious Day!

The baby shower was wonderful - we had perfect weather and were able to spread the event inside and outside. Everyone seemed to have a good time - I’ve added a bunch of pictures to the story – I hope you enjoy the report.

The Preparation and Food
On Friday night my niece, Sonny and my son, Hugh W. - both the designated godparents – did all the decorating. The place did look festive and there was no doubt that it was for a baby shower. Sonny also made the most beautiful diaper cake. What? You don’t know what a diaper cake is? Neither did I until recently but they are all the rage at baby showers these days. See the picture below. You can actually buy instructions on how to make one – and it is a project. 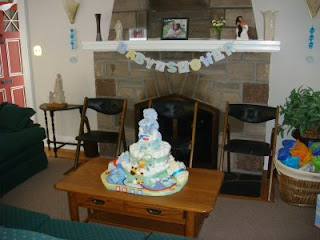 I enjoyed the cooking and preparation and my husband Hugh is the best sous chef on earth. He sliced and diced an incredible amount of vegetables on Friday. Josh’s Mom made 80 deviled eggs – all gone like greased lightning and a huge amount of spinach balls which were so popular people were still eating them for dessert. Brushetta and vegetable platters were spread across the living room and outside on the patio and in the kitchen. Other appetizers were here and there. I was surprised that good old fashioned punch (non-alcoholic – it was Noon after all) was the drink of choice for so many. The punch was especially popular with the younger people as it is apparently a novelty for them. The main course featured Ham, Chicken Caesar, Wraps and salads. I made Fran’s favorite pasta salad and a signature dish - rice salad. Aunt Clare made her famously delicious potato salad. Fran’s aunts and cousin contributed to a delectable choice of desserts.

The Gifts and the Surprises
I can’t believe all the presents Fran got. They are certainly well equipped and ready for when the baby comes home. Everything from the travel system, car seat and baby monitor to diapers and bibs are ready to go. Whoever said that they don’t have cute boy baby clothes was wrong. Take a look at these. Helping with the gift opening were my niece Sonny who is the designated godmother, Fran’s godmother and Fran’s Maid of Honor.

The baby shower itself was not a surprise but I did have surprises that I could not give away in an earlier post. First of all I had contacted and invited a childhood friend of Fran’s who she had pretty much lost contact with. Maggie was one of the first people Fran saw when she came in the door and it was great to see them catch up with each other. Along with the invitation I had added a note encouraging books as gifts. Books are an essential in my book (okay a poor pun) and none were on the registry. Now the nursery has a wonderful library – what a brilliant set of books she received as gifts. Goodnight Moon, Nursery Rhymes, ABCs and much more...... 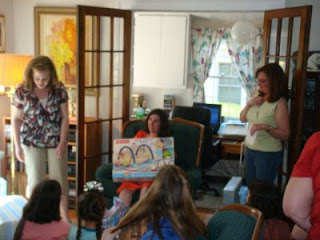 40 Women Connecting with Each Other
Family, family friends, childhood friends, college friends, neighbors plus three men - the “Shower Staff” – Fran’s Dad, Josh – the Dad in Waiting, and brother-godfather designate. People were spread across the living room, dining room, family room and patio and there was a joyous buzz as people connected with those who they are close to, new friends and reconnecting friends. New Facebook friends were made for sure. Opening baby gifts is really a lot of fun and comments on cuteness, usefulness and general convenience not know in the past was of course among the chatter.

The Activities
We had three actvitiies that had strong participation and were lots of fun. One table in the family room was set up to decorate onesies with fabric markers and write notes on diapers. Another table had Advice Cards for Mom for people to write their advice on. While the presents were being opened we announced the winners. Josh’s Mom (The experienced Mom) has three grown sons and Josh’s cousin (The Young Mom) has two young sons and they each selected their favorite. The men got to take a break from their chores and joined the women as they each selected a favorite winning onesie. Josh had the right idea - he chose the one by my niece Clare which said “My mother is gorgeous!” What a creative group of guests. Check out this picture of some of them hanging on display. 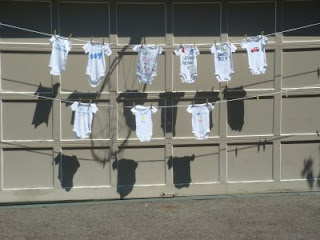 Summing Up
I am so grateful to everyone who helped and came to Fran’s baby shower. It was a truly wonderful day for Fran and Josh. Preparing to welcome a baby to the world truly “takes a village” and the karma generated was nurturing and joyous and enhanced once again our readiness to receive and nurture a new life. Now Zach – I am really ready for you!
Posted by Marion Conway at 11:01 AM

This is a very cute idea! I've not seen it before!
I found you on blogher.com
I recently started a blog for Grandma's as well. Please come by and say hi. It's very new but I'm adding every day.
I have 2 grandsons, one born via the gene pool and one born of my heart. (My daughter's fiance' came into the family with another grandson just for me!)
I look forward to your visit!