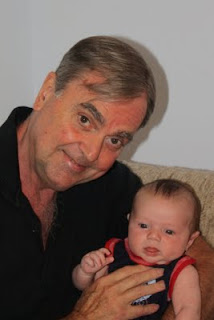 Zachary and I get along very well. One of our favorite routines is for him to sit on my lap at the table when the family lingers after dinner. He likes to be part of the action and seems perfectly at ease there. I hold him on my leg and lean him against me. One arm is around him and the other hand is on his chest or nearby just in case. He feels sooo good. I’ll always remember.

Another thing is that we have jokes together. The first laugh happened in an instant: Zach let out a noisy fart, I made giant bug eyes, and he smiled back. Since then he smiles when I joke with him as long as I’m a little silly about the punch line. Not everybody laughs at my dumb jokes so I really love this kid!

I was honored and pleased to be Zach’s first babysitter. He was still pretty new but doing just fine. I visited with him often and was very comfortable caring for him. I could do all the necessary things such as preparing bottles, feeding, burping, changing, etc. It had all come back to me. And very importantly, I listened to his Mommy (a.k.a. my daughter) and followed her instructions very carefully. Then one day Fran and Marion told me they were going on an outing for a couple of hours and I would be caring for Zach. Yippee! We did just fine together. Since then I’ve watched him several times and am happy to do so.

Zach’s learning to stand. He does it best when holding him face to face on my lap. He pushes himself up to a standing position. He’s wobbly of course and I hold him carefully but he really likes to do it. Sometimes he seems squirmy and it’s not hunger or a wet diaper or anything like that … he just wants to stand. And when he does it there’s no mistaking the pride on his face. Look at me Grandpa!

I sing to him to. If a lullaby is in order I may sing Amazing Grace, or If I Fell (the Beatles), or Hush-A-Bye. But since I generally see him during awake times, the songs are more lively like the one about Dancing With a Dolly With a Hole in Her Stocking or about how I Love to Go A Wandering. I can’t really say he’s into songs yet; he just looks at me and turns to something more interesting. But we’re working on it. I expect some day Zach and I will sing songs together like The Wheels on the Bus, or Old MacDonald Had a Farm or A Hundred Bottles of Beer on the Wall. It’ll be fun!
Posted by Marion Conway at 6:31 PM