I considered naming this post “Zach grows up” but that seemed a bit pretentious. On Columbus Day, October 12th, Zach had solid (I think that’s exaggerating actually) food for the first time. We were delighted that Fran chose to share this event with us and it certainly was a fun event. The banquet consisted of the traditional first meal of rice cereal. Zach was in his “Lion seat" – sort of a portable high chair which he has already been enjoying at the dinner table and all eyes and smiles were on him as his mother aimed the first spoonful at him. A few seconds later the cameras were out and our family chroniclers snapped away. 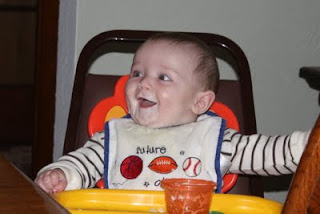 So did Zach enjoy the meal? This picture speaks for itself. He had a great time! Since then both Hugh and I have had a chance to feed him and it is really so much fun! Zach sticks his tongue out wide, slurps up the cereal and enjoys his supper. However, lately he has been looking at us while we eat as if to say “Is that all there is?” The plan is for him to have applesauce next – for the first time on Thanksgiving – just short of being six months old.

Check out The Grandma Chronicles over the weekend – I’ll be reporting on the first Halloween – and yes, of course I’ll have a picture.
Posted by Marion Conway at 11:41 AM