Zach is five months old now and his parents are more than ready for date night. So my daughter has lined up both sets of grandparents to babysit on alternate weekends. We have watched him twice now and the best way for me to describe this is “Grandparent Heaven.” We see quite a bit of Zach during the week and sometimes for dinner but having him all to ourselves in the evening is a whole other experience. Here’s what our recent visit was like.

Fran was at our house in the afternoon and we walked in the park and then she napped when Zach napped. As usual when he woke it was an active time of day and all the adults took turns entertaining and being entertained. Then Fran left and we had five hours – Yes, five hours to ourselves with Zach! Zach was still in active mode and he spent some time on the floor and in his bouncy seat before dinner. At dinner we tried to feed him his newest dish - applesauce - but this was a messy event and we heard him loud and clear: “You can keep that applesauce for yourselves – I don’t like it!” But he enjoyed a sippy cup of water to no end. 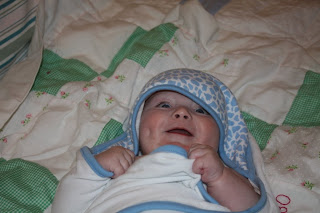 Well by this point we were ready to wind down and upstairs we went for a bath. Our niece gave us a baby bathtub she is long done with and so we have our own. Zach loves the bath. I filled the tub and Hugh undressed Zach. He loves being naked – what baby doesn’t. He was in the tub for just a minute when what should there be but a giant pee! I held him up and Hugh provided fresh bath water. Zach loves the water and splashes and could probably stay there for hours if we let him. His parents have some bath toys but did not bring them but I had a rubber duckie in my hidden closet of treasures and we all had fun with that. Hugh and I broke into a rendition of Rubber Duckie from Sesame Street and Zach smiled and laughed. Then Grandpa handed him directly into the hooded towel I had waiting. Soft and clean and as nature intended. Zach’s grandparents sang some fun children songs and we all had a good time. 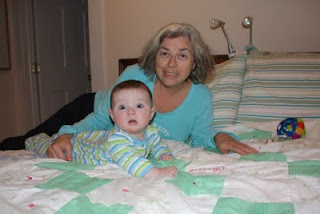 Time for the sleeper – how cute – once he begins to put his fist in his mouth which is Zach’s way of saying he’s hungry. I went to the kitchen to make the bottle and when I returned Zach was enjoying playing on the bed. By the way, this quilt was made for Fran almost 30 years ago by Kathy Cassidy. When he was ready for the bottle, Grandpa got the honors. We still have the rocking chair we had when Fran was a baby and it is near the windows in our bedroom. Zach loves light and was staring at the unlit light above him. I turned the dimmer on low and Zach had his bottle and stretched out in the most adorable restful pose. Hugh held him for a long time and then put him down in the Pack n’ Play. We sat up on our bed and just wallowed in what a nice night we were having. In a little while Zach was restless. Hugh picked him up and after a big burp followed by little ones he seemed wide awake again just as his mother said would happen. It was my turn to hold him and I sang Hush-a-Bye just as I did for his mother. His eyes got heavy and then closed and I laid him down on our bed this time. We laid on either side just soaking in the peace of being with our sleeping grandson. Then we heard his mother’s footsteps on the stairs and it was time for Zach to go home.

Grandparent heaven – this is it.

Marion
Posted by Marion Conway at 11:46 AM