The Snowsuit, the Car Seat and the Auto Industry Challenge

Our grandson, Zach was born in June and one of the wonderful things about having a baby born in early summer is that you get to have so much time outdoors before you have to deal with things like snowsuits. We live in New Jersey and winter is cold. There may be signs of global warming in Greenland, but there are none here.

We had car seats when our kids were born and they seemed like an important safety necessity but on every other level pretty awful. Guess what – that hasn’t changed. One of the things I’ve learned as a new grandparent is that they don’t seem to have improved car seats from other than a safety perspective.

Our first exposure to the new car seats seemed like an improved and economical idea. This is what is called a “travel system.“ The “container” that you put a baby in is attached to a “base unit” in the car or a collapsible stroller base. That sounded like a great idea. Well the stroller base of the travel system is heavy and did not fit in my husband’s Buick Regal trunk but it does fit in the trunk of my Ford Focus – go figure – which is deeper. We were able to outfit our car with just a base unit and move the car seat from my daughter’s condo to ours saving some investment in an early car seat.

But...the car seat was supposed to work up to 32 pounds. But as my husband says this must be a naked 32 pounds. Adjusting the belts as Zach grew was not very convenient but doable. We could tell it was not going to work up to 32 pounds. Little did we know it would max out at 18 pounds! 18 pounds you say – how can that be? Well when you put an 18 pound baby in a snowsuit you add just enough bulk that your baby looks like he is in pain when strapped in. By the way Zach looks adorable in the snowsuit his other grandparents bought him and mittens and hat. I’m sure he is warm in there but he sure doesn’t like getting dressed for going out in the cold. Spring! Spring! Come soon......please!!!!

Anyway – back to the car seat story. Fran and Josh put their Christmas BabiesRUs gift cards together, did their research, shopped the sales and bought a new car seat. Wonderful. But now we were moving from the condo to the parking lot with this huge car seat and a 20 pound baby and baby gear and strapping in a car seat to our car on a regular basis something that was really intended to be installed in a car and left there. We finally got it – we had to buy our own car seat.

My daughter said we didn’t have to buy the same one she did and had only one manufacturer she objected to because she thought they were subject to too many recalls. We did our own research by reading the customer reviews at BabiesRUs. First we read to good ones and then reversed order to read the bad ones first. I highly recommend you use the customer review section of these websites like this – its set up to choose either direction. We were focused on getting a baby in an out in a snowsuit as this was the issue of the day for us. All of the car seats for sale should meet legal safety requirements so differentiating which one to buy on this basis was not a factor. Concerns about installing a car seat seem to be a big issue in the customer comments and so we paid attention to this. BabiesRUs is set up so that you can practice installing it in a sample car. It is the difference though of doing the sample math problem versus the hardest one at the end of the chapter. There were reviews by women with firefighter and marine husbands who had trouble following the manufacturer suggestions and recommended workarounds.

We also read the comments about the old car seat and were not surprised to find that there were many comments just like ours. Some also mentioned that the snowsuit was the final blow. Okay – okay I’ll get past the old one.

We made our choice – waited two weeks for it to be on sale – and used great coupons my daughter provided to buy our very own car seat. It was not the same one our daughter bought but it is similar. Here is the good news – you can get Zach in it comfortably in a snowsuit. Here’s the bad news – it is huge even though not quite as big as our daughter’s. It almost eliminates using the front passenger seat of my car because the seat has to be moved up so far. I swear it is like a baby lazy boy recliner. I think this will be corrected soon when we can change it to be front facing. Zach is still young enough so that it must be back facing. Design wise it is as ugly as these seats were 30 years ago. I hope that doesn’t sound too awful that I even mention such a thing when I should only be concerned about safety. But...but...but...in 30 years it would seem that there would have been a lot more advancement in car seats than there has been.

So here is my suggestion and challenge. This is a job for auto companies – not baby product companies. Auto manufacturers should take on this challenge and make something designed to work with their vehicles. For all the complaints about auto companies if we look at advancements in auto technology over the last 30 years it really is remarkable. Advancement in baby car seats – not so much. Hey Al Mulally (CEO of Ford) I understand you want to go after the “family“business. Here’s an idea. How many cup holders a car has has been played out – how about taking on the better car seat?

Just for the record: We bought a Graco My Ride car seat


For about $50 more you can get the Graco My Ride Convertible Car Seat which converts into a Toddler seat for latter use. We decided to just buy a toddler seat separately when Zach is ready for it and did not go for the convertible version. But here it is:


You may want to do the “bricks and clicks” shopping on this one. It is good to look at them in the store and see how big each is and how they work. But the box barely fit in the back of our car. Going home, shopping online prices and having it delivered may be a good idea as long as you have the time before the baby grows out of the first car seat.

I am excited to be attending my first International Toy Fair in New York as a member of the media. Once I signed up and my application was accepted, I joined the social networking community for attendees and gave a little background about myself. Soon I was receiving product information about some great products that people thought would be of special interest to grandparents. And I will be blogging about products I see at the Toy Fair after I attend in mid February. But a couple of companies have sent me samples and I am soooo excited about this one that I just can’t wait to write about them. 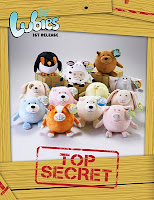 Lubies!!! They are just soooo cute and adorable. Lubies are round about 6 inches in diameter and each one is a different animal. They are ultra soft, squezzable, and can double as a ball. They will appeal to ages 0 to 99. My grown son thinks they will be popular with women in their 20s – he says they are the kind of thing they collect and give as gifts to one another. Each Lubie is a different animal and comes with a little tag with a “fun fact” about that animal. The monkey tag informs that the male howler monkey can be heard from ten miles away!
Lubies have been created by a new company, Dakota Designs. Dakota Designs was founded by Joy Michel and Michael Perry. Joy was Creative VP of Ty Inc. and the designer of nine of their plush lines including Beanie Babies. You can see that Joy has applied her expertise and creativity that she used at Ty with Dakota Designs. There are new Lubies being introduced all the time and they will definitely appeal to children and collectors alike.

I already plan two more posts about Lubies. I am saving one post about the rabbit and chick (two of my favorites) for an Easter preview – perhaps with a giveaway and one for the Spring when the first baseball player Lubie is introduced.

This Christmas was my first experience with toys for young children in about 20 years. So much that is available today seems to play music, try to teach numbers, letters, colors and shapes and be made of sturdy plastic. Lubies seem like such a refreshing change. They are just cute and allow for your grandchild’s imagination (remember that) to rule the roost. Lubies won a 2009 Preferred Choice Award from one of my favorite publications – Creative Child magazine.

Lubies are very reasonably priced at under $20 – from $9 to $17 are the prices I have seen the most often. Lubies won’t cause any damage to your home or give you a headache from playing the same singsong tune over and over. And if you play with a Lubie with a young child you are likely to enjoy yourself too and not get worn out – a worthy grandparent objective.

You can order Lubies from Amazon directly – Just click link below:

Posted by Marion Conway at 7:18 PM No comments: