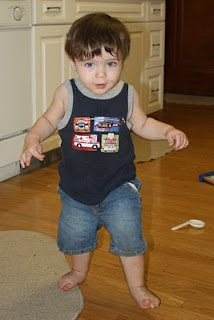 We love each new phase and somehow are still conjuring up the energy to deal with each one. Zach brings us new energy and joy and we are grateful that he is in our lives each and every day.
Posted by Marion Conway at 10:29 AM

Nice. Have fun.
We found that life is much more exciting for the child and relaxing for the parents when the ENTIRE field of exploration at home (probably most of the house) is completely child-proof. In a couple years, one can display all those fine sculptures and crystals again.