Trout for Dinner, Another Haircut and Conversation 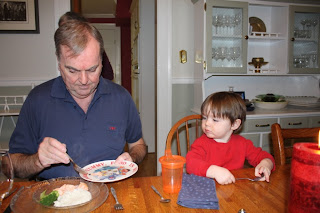 I haven’t posted about my grandson, Zach in a while but that doesn’t mean that there isn’t plenty happening. It just means that I haven’t been taking pictures and I usually like to have pictures when I post. So what is happening? Here a few tidbits. When you pass 18 months they pretty much say everything goes on the diet and so we took the opportunity at Sunday family dinner to have trout. Here in the first picture you can see that Zach was looking sort of skeptical and then skepticism turned to “no thank you” but in the end he was still friends with his Pop. 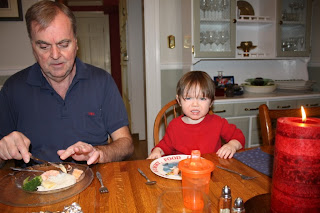 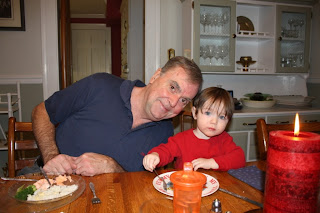 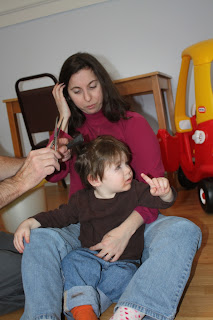 You will notice in the pictures above that Zach really needs a haircut and Pop, my husband Hugh,is Zach’s official barber. Although Pop has given Zach haircuts twice before this is probably at the peak time of difficulty for this project. Zach is strong and super active – How could we possibly get him to sit still for this? Well the answer is in sort of bursts. He would sit for a few snips squirm around and then resettle in. Mom helped keep him occupied and steady and I was being pretty useless - just taking these pictures. A couple of times I helped too, but not enough to take too much credit.  I guess I should have at least done a better job of washing his face after lunch.  For the record, that's a meatball that he enjoyed but I didn't wash off that well. 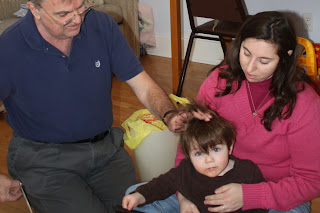 The other big thing happening which pictures don’t lend themselves too is Zach is TALKING!  Zach's vocabulary is expanding beyond Mommy, Daddy and Grandma. He is saying words that we all recognize including bath, more, eye. He loves his Pop, but he hasn't said that yet. Oh, he says eye when pointing to his eye. One of Zach’s favorite books features body parts and Zach points to his nose, ears, mouth and eyes. He know the word "no" very well and he both uses it and responds to it. If he goes to something he isn’t supposed to at our house he will look at me and stop before proceeding. But he is always checking.
We are babysitting on Friday night. Fish won’t be on the menu. But conversation will be.  I didn't get a picture of the finished haircut, but I'll post one next week...stop back and check it out.
My earlier post on Zach’s first haircut
Posted by Marion Conway at 9:51 PM