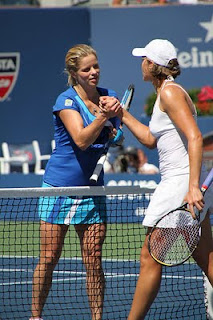 As summer winds down wouldn't it be nice to have one big, exciting outing with the kids - especially if it didn't cost too much.  How about free - even better. The US Open will be held at the Billie Jean King Tennis Center in Flushing Meadows, NY from August 29th through September 11th.  I have enjoyed my several trips to the first week of the Open and loved seeing the top players play - sometimes up really close at the smaller venues and sometimes seeing someone who later became the darling of the tournament such as Melanie Oudin play in the third round.

But there is a lot of action in the week before the Open officially begins and here are a couple of great opportunities for kids.  During this week there are the "qualifying rounds" for players who don't have a high enough ranking to automatically be able to enter the Open.  Future stars are playing in the qualifying rounds and some of them may even make a mark this year.  On Tuesday, August 23rd, the Open will have FREE admission for everyone.  That's right - absolutely free.  Well, you do have to pay for parking or train/subway fare to get there.  The whole Center will be open and there will be special events.

This is an amazing opportunity for young tennis fans. Many of the qualifiers will be young people and this will be exciting for the kids too. You can buy one of those big green balls that kids use to have players sign as they leave the court.  Young children - and even older ones - love getting autographs.  That is part of the fun.  And the outdoors food court will provide the opportunity for a treat or lunch.

That isn't all.  There is another fun event at the Open that is FREE! On Friday, August 26th, the USTA will attempt to set a Guinness World Record for the most people hitting a tennis ball with a racquet at 9 am at the Billie Jean King National Tennis Center. Hundreds of people are expected to come out and join US tennis star Mardy Fish as they attempt to join the record books. This event, which is co-hosted by the USTA and Wilson, is free, open to the public and fans are encouraged to come and be a part of this amazing event.


If you are a tennis fan, consider making this a day with your grandchildren.
Visit the US Open official site and check out everything about the tournament - the best in the world! Our favorite day to attend is Thursday of the first week - that would be September 2nd.  If you'll be going that day - sorry it isn't a free day - let me know.  I'd love to meet you.
Posted by Marion Conway at 5:52 PM