The Rhythm of Grandparenting This Summer 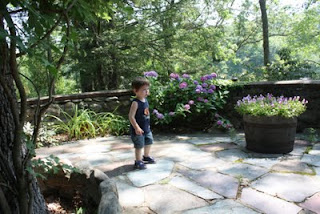 In the summer the rhythm of our family life makes some changes. We have a cabin at a small lake community in the New Jersey mountains and my husband, Hugh, and I try to spend as much time as possible up there. It’s cooler and less humid, there’s no TV, we read books and love to socialize with our summer community family. We frequently have a Friday to Monday weekend – sometimes longer. So…. Family dinners at home are on Tuesday night instead of Sunday. Date night babysitting is on Wednesday rather than Friday. Laundry day is Thursday and grocery shopping seems to get done more frequently in smaller bites.


One of the pleasures of living in the northeast is the experience of changing seasons. One of our pleasures this summer is seeing Zach, our grandson, grow to love our summer place. Fran and Zach have been coming up on Mondays and Zach has established his own routine. Last week he jumped out of his car seat and ran to me with a big smile. This, as all grandmothers of young children know, makes you the happiest person in the world at that moment. But – he clearly had his own agenda and wanted to pursue it before the adults had any ideas of their own about what to do first. He started walking and soon I knew he wasn’t headed to the lakeside beach area – he was headed to the area where a bunch of ride on toys, balls and basketball hoop were available for communal use. Most of these have been outgrown by some older child but left here to be enjoyed by all. Zach went right over to the fenced in area where they are kept neatly and said open, open until his trailing grandmother complied.

So finally we were done with playing on ride-ons, basketball and hitting a large light weight ball with a bat and now he was ready for the beach. No need to lead him – he knew the way and greeted his relaxing mother and Pop with a big smile.

Pop’s turn. Zach loves to jump off the dock into a shallow area and be caught by his Pop. Pop loves this too. Grandma had her turn at relaxing and enjoying the conversation mostly about her grandson. Lunch called and so back to the cabin we went. Again Zach knows the way. He’s two – and I’m beginning to think he is not the kind of person who will ever get lost. He seems to have an innate sense of direction.

Zach already knows that Grandma will always have a treat – but one approved of by his mother. He had hardly entered the door and he started to ask for strawberries. And of course, 1,2,3 - grandma put out a plate of bite size strawberry pieces. He enjoyed lunch and found the cache of toys I keep at the cabin. Then he let us know he had to use the potty and wanted Pop to help him. 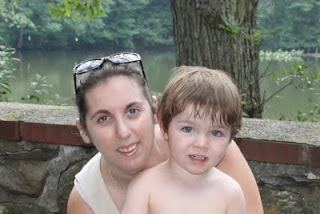 Fran and I then took Zach to the tennis court and I got a child’s racket from the common area. Zach loves sports and especially hitting a ball with a bat or racket. When this was done, we went back to the beach and after a snack – more strawberries – he LOVES strawberries – and another potty trip it was time to head home and nap in the car.
When you have a two year old around a hot summer day isn’t going to be a slow, lazy day but it sure is enjoyable. 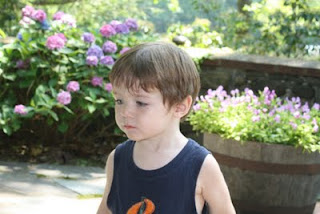 Posted by Marion Conway at 5:12 PM

What a cutie! My grands love strawberries and playing ball, too.