Today's post is not one written by me.  It is one that I am sharing with you as part of the Grandmother Power Blogging Campaign.  This is a collaborative effort of bloggers writing about Grandmother Power from May 7th to 14th, 2013.

I could have written my own story and perhaps next year I will but this year I wanted to share one of these amazing stories of what is being contributed to society by grandmothers in Inda - and spreading worldwide.  I am an engineer by degree so I was particularly drawn to the technical nature of this project.  Enjoy.

You can get details and join the campaign visiting this link. 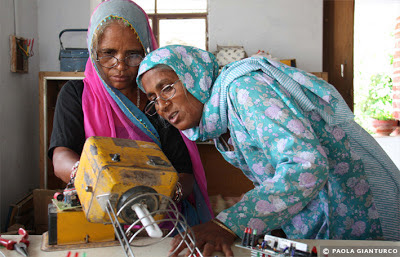 At first, the Barefoot College in Rajasthan, India taught young men to be solar engineers, hoping they would bring light to their rural villages. The plan didn’t work: the men went straight to the city to find jobs, not back to the villages that so desperately needed their expertise.

The College made a surprising course correction: they invited village grandmothers
to learn how to bring light to their communities.

The grandmothers were illiterate and existed on less than fifty cents a day but they were mature and gutsy, and wouldn’t dream of moving away from their grandchildren.

Their teachers were other illiterate grandmothers who had already finished the course and who shared their knowledge generously.

The Indian grandmothers went home and brought light to a whopping 23,000 households in 16 Indian states.
Even more inspiring is what happened next. The UN began sending grandmothers from other developing countries to learn from the Indian grandmothers. Together, Grandmother solar engineers have brought solar electricity to 45,000 households in 64 countries in the Middle East, Africa, South America and Asia.
With light, life is transformed. Midwives deliver babies at night. People charge cell phones and preserve food in refrigerators. Children do homework without getting black lung disease from kerosene lamps.
Grandmother solar engineers are VIPs in their communities. Bunker Roy, head of the Barefoot College, says, “I meet them as grandmothers. But they return to their villages as tigers.”

From Grandmother Power: A Global Phenomenon by Paola Gianturco, published by powerHouse Books. 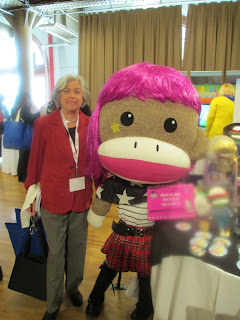 On Tuesday I attended the Time to Play Spring Showcase in New York.  25 toy companies displayed what’s new and being featured in the stores right now.  I learned a great deal about what is hot and new and what is “new” but grandparents will remember a version of it.  In the next few months I will do a number of detailed reviews – some with giveaways – but today I want to quickly feature my favorites and highlights of the show. All the photos are mine from the show displays so that's my excuse for any less than perfect shots.

Sock Monkeys – From Patch Products
These are soooo cute. We all remember sock monkeys but these are not your grandma's sock monkey. That’s me with a life size “Magenta Beetsch."  There is a punk rocker, zombie, pirate and a nerd – my favorite.

Dolls – From Mattel and WowWee
Remember when dolls for little girls were “pretty”?  Forget that.  What is popular today are ghouls, vampires and zombies.  They used to be more for the preteen set but now they are being featured for girls much younger.  Want to be a cool grandparent?  Check these out.  Monster High Ghouls Alive from Mattel will be marketed for girls 6 and up.

Classic fairytale princesses now appear as zombies in these “Once Upon a Zombie Dolls from WowWee.

Outdoor Fun –  from Jakks Pacific, Razor and Crayola
There were lots of outdoor toys and here are some of my favorites.

My favorite is the new SkyBouncer from Jakks Pacific – makers of the high jumping skyball.

Also catching my eye from Razor is this scooter with a chalk holder on back. Draw while scooting – cool.

And sticking with the chalk…I am always amazed with how Crayola comes up with new products every year.  This year they are featuring washable chalk and this rainbow chalk.  You can have a rainbow with just one stroke.

For babies – From SASSY
If you are my age you remember the Sassy seat which was lightweight and hooked onto a table and provided a seat at the table for a baby.  We loved ours and took it everywhere.  Sassy doesn’t still make a Sassy Seat anymore but they do make lots of high quality, colorful items for babies – all with at least a bit if their black and white trademark.  I love these cute “nonsters” being featured this Spring.

Check out these soft cloth teethers.   Apparently the newest pediatrician recommended teether is soft cloth.  I particularly like the strawberry.  It’s cloth – just put it in your freezer.

There’s lots more.  Next I’ll be writing about toys based on new Movies and maybe technology oriented toys. Any requests?  Stay tuned……

Some of these toys are not quite on the market yet.  I have links to the ones that are on Amazon below.

Posted by Marion Conway at 2:18 PM No comments: