In the Spring and Fall I attend the Time to Play Showcase in New York and get to see lots of new toys that will be available for the coming season.  There is always a crowd around the ZING display and lots of smiling grownups enjoying playing with the toys.  They are lots of fun and although you can play with them indoors and outdoors I recommend them for outdoor play.
Today I am going to describe two items the Zano Bow for young children and the SkyGliderz for kids of all ages.

Zano Bow
I usually review products that I can test out on my grandson or another child who is visiting.  This one seemed perfect for that. The Zano Bow is for ages 4+ and Zach is 5.  My husband, Pop, is the official barber and when Zach gets a haircut, Grandma usually provides a gift he can choose from her cache of toys she gets for reviews and at shows.  Zach wasted no time with this selection and he chose the Zano Bow for his summer haircut present.  But soon it was time to go home and I didn’t get a chance to see him play with it.  I did ask him about it.  Zach’s review – “I like it and I play with it outside with my Dad.  It goes far and works really well.  Yes Grandma – it is easy to figure out how to use it.

The Zano Bow is a small bow and arrow combo.  The bow is only eight inches long.  The arrows are designed to fly super straight and so even a younger child has a good chance of hitting the target (it's on the back of the package).  The arrows have soft-foam suction cup tips and did not go very far.  This is a toy that a child can enjoy alone but can also be fun for a parent or grandparent to join in.  Because of the limited reach and soft arrows this really can be played with indoors.  The arrows won’t knock anything over and no one will get hurt.

The Sky Gliderz says for ages 8+ but our 5 year old grandson had a great time with it and no problem using it.  Pop showed him once and he was off. The Sky Gliderz was his present of choice for his back to school (Kindergarten begins next week!) haircut this morning.

Sky Gliderz are light weight soft foam stealth planes that zoom through the air with the greatest of ease. To prepare for takeoff, hook the planes on the bungee loop, pull back, flick the wrist and watch them ascend into the sky! I definitely recommend using this outside as it can go quite a distance and high into the air. 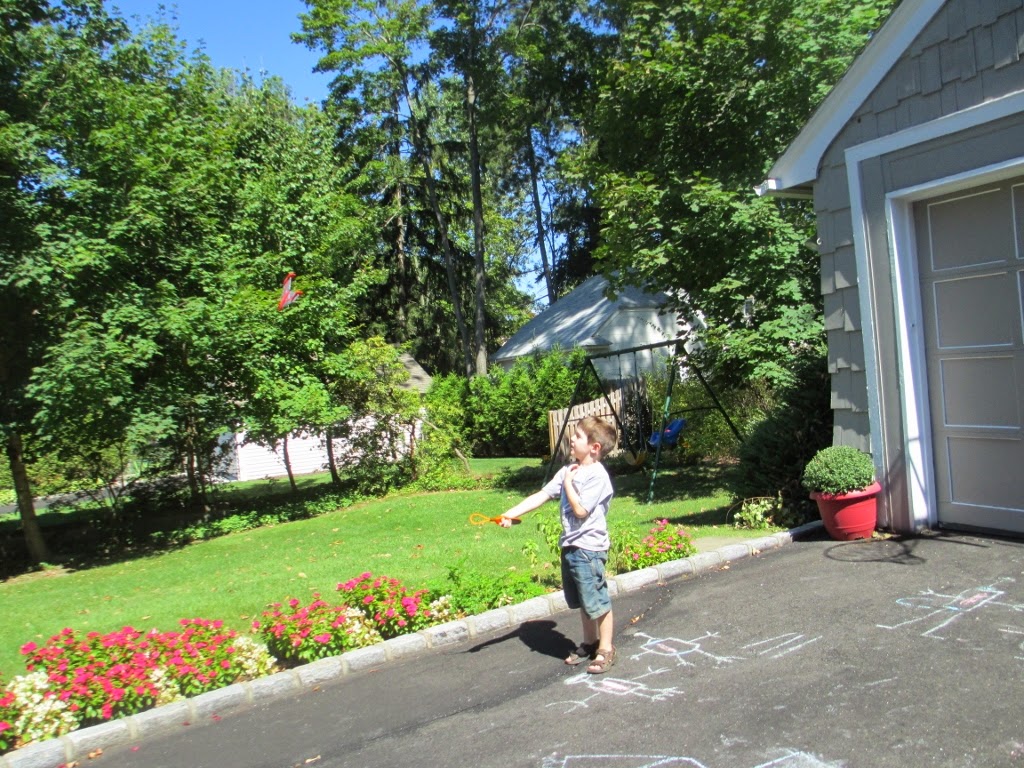 If you hold the glider and aim at different angles you can get loop-de-loops, boomerang and other paths that the rocket will take.  Zach enjoyed this and was willing to share with Grandma and Pop so we all took turns.

The one problem we had was that we have a lot of trees in our backyard and the planes went so high that they would get lost high in the trees.  Even if you are careful where you aim, when the Sky Gliderz moves fast with its high flying loop-do-loops you don’t know where it will land.  So try to stay clear of trees. 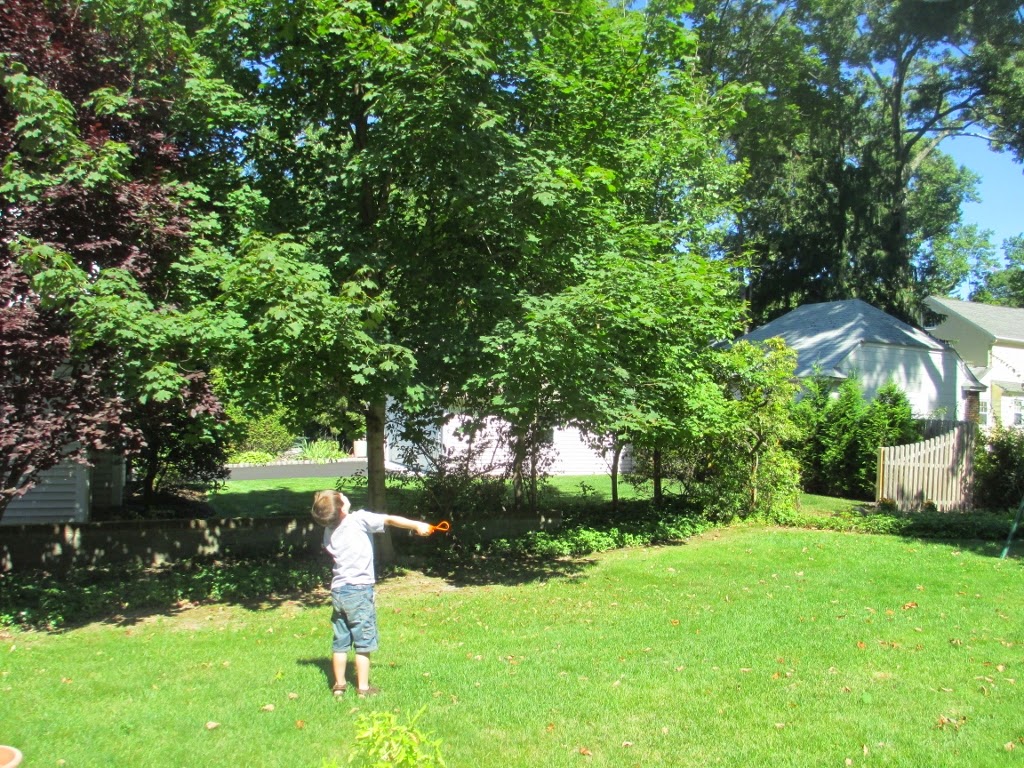 All three of us had fun with the Sky Gliderz and it is a great intergenerational active toy.  Great for outdoor parties too.  Take turns and even the younger kids can make these planes take quite a ride.

David Letterman had great fun with it too.  Here he is playing with it about a month ago on Late Night with David Letterman.  Dave’s comment, “This is great.  I can do this all night.”

Oh - and that is a driveway full of Teenage Mutant Ninja Turtles in Chalk.  That was last week's project.


You can find both of these toys on Amazon.  Just click below to check it out.

Posted by Marion Conway at 3:11 PM No comments:

Our Outing to the LEGOLAND Discovery Center Westchester


It is mid-August and some kids are already back in school, but here in northern NJ summer camp programs have ended and school starts after Labor Day.  It is prime time for summer outings.  Yesterday my husband and I took our 5 year old grandson to the LEGOLAND Discovery Center  Westchester.  We had a  blast!  First of all, our grandson is a super LEGO fan and I have written about this before.  He has sets from a variety of current themes and is working through the sets that were my son’s at a breakneck pace.  We were sure that Zach would enjoy the day but not sure how two grandparents would do.  Turns out – just fine – tired but not wiped out.

LEGOLAND Discovery Center Westchester is actually in a huge outdoor shopping center with a parking garage half a block away. However, it is indoors and cooled to a comfortable temperature.  First we stopped for a few minutes and enjoyed this outdoor fountain.  Grandma was prepared with pennies and Zach enjoyed skipping some pennies.

The first stop in LEGOLAND is the Factory Tour and “Dr. Brickabrac” leads the kids from station to station explaining how LEGOs are made.  Zach was one of the kids who raised his hand and got to help at the mixing station. 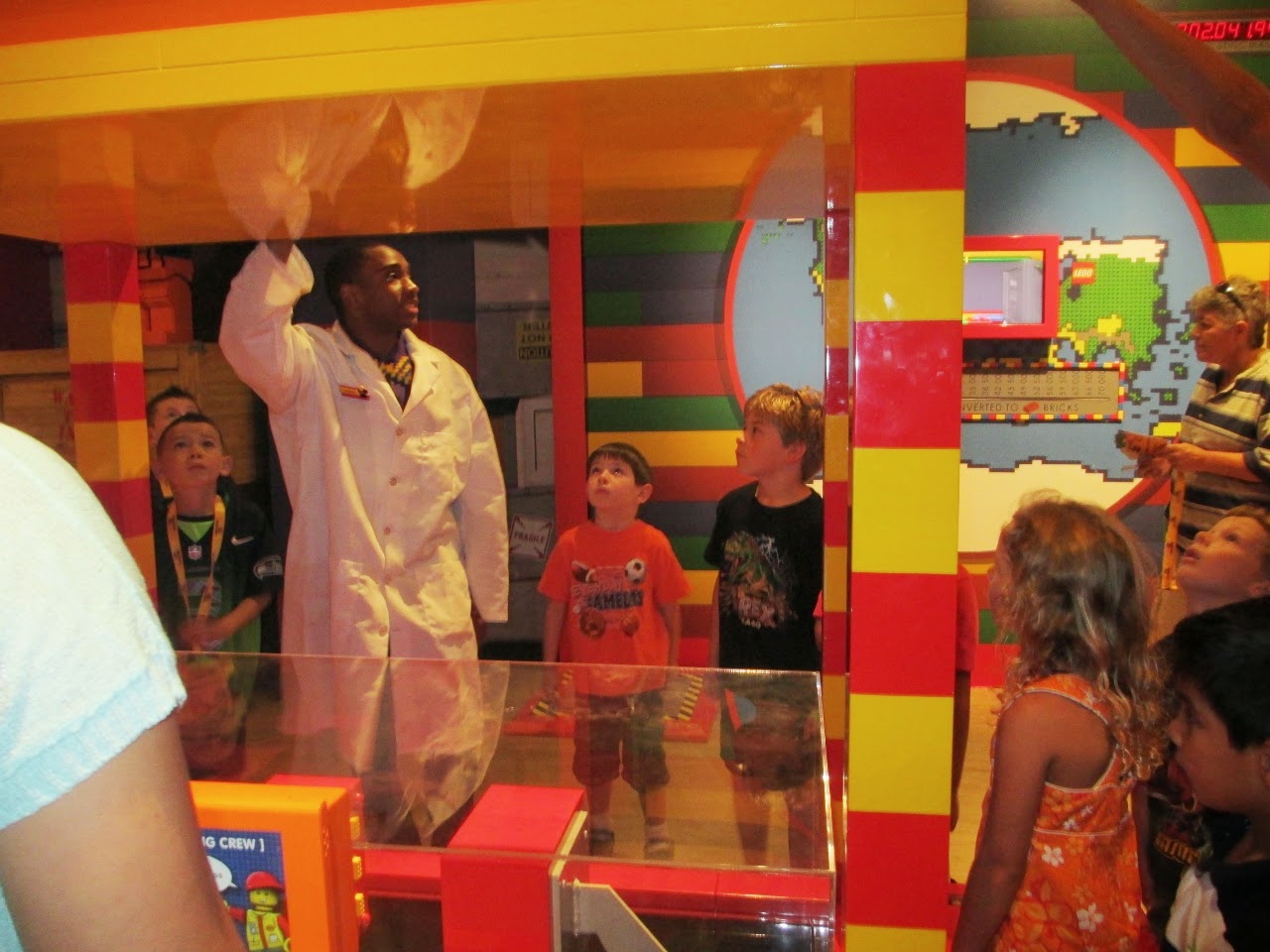 Next there is the Kingdom Quest Laser ride with laser guns that cause villians to explode on the wall.  This was my least favorite part and I really felt they could have had an upbeat game rather than a kill and violent one.  The particularly violent news lately made me really feel uncomfortable with this exhibit.  Considering the average age of the kids,  I think that this is inappropriate and should be reworked to something positive.

Next you are in an exhibit area – LEGO MINILAND - and this one is New York themed with big LEGO replicas of New York landmarks – everything from the George Washington Bridge to museums, Empire State building, NY skyline, statue of liberty, subway series baseball stadium and more.  You could push buttons to turn on lights or cause some to move.  Lots of fun and picture taking in this area.

You can take as much time as you want here and then you move to a huge action area with a huge Play Zone -  LEGO themed climbing set -  in the center and surrounded by stations with activities that are good for different ages and interests.  You can take pictures here but there is too much activity to bother for most people.  Like lots of other kids, our grandson wanted to play on the climbing set for quite a while and benches were provided all around it so we sat and enjoyed watching the kids run wild inside.  It was enclosed with a net so the kids can only come out and join their guardian in one place.

The various stations include Merlin’s Apprentice Ride, LEGO Racers – which you build and can test drive on two tracks,  a LEGO studios 4D studio,  a LEGO Master Building Academy, DUPLO Village, LEGO Friends Center and more.  There is something for everybody so you can bring children of different ages at the same time. Zach enjoyed building a racing car and have it go down the track.  Alas it crashed and when he rebuilt it he didn't want to send it down the even steeper track.  We had lunch in the café and it was actually reasonably priced and they had a good selection including kids’ and adult sandwiches, Capri juice, Water, soda small fruit cups, apple slices, salads and chips.

We enjoyed a bunch of the activities and then it was of course time for the gift shop.  Now this is a LEGO store that has everything. It is a real wonderland for a kid who loves LEGOs. Zach got the Teenage Mutant Ninja Turtles Karia Bike Escape and his first Guardians of the Galaxy set, Starblaster Showdown.  When we came home he started to put them together with Pop’s help, but soon it was time for Pop to barbecue and he surprised us with how soon he had put them together by himself.  Zach is becoming quite a LEGO building expert.  He was amazed by the variety of Mixels and also got a “red package Mixel.”

Grandma also bought a couple of items to hold back for Christmas and haircut gifts.  There is the Chima Legend Beast and the green package Mixel which “He has been looking for and hasn’t seen anywhere.”

The facility was very clean and even the bathrooms were fun.  Each stall had a different huge LEGO figure on the door and the kids enjoyed choosing their favorite.  I wished I had brought the camera into the restroom – something I have never thought before.  There was plenty of staff and they were friendly and helpful.