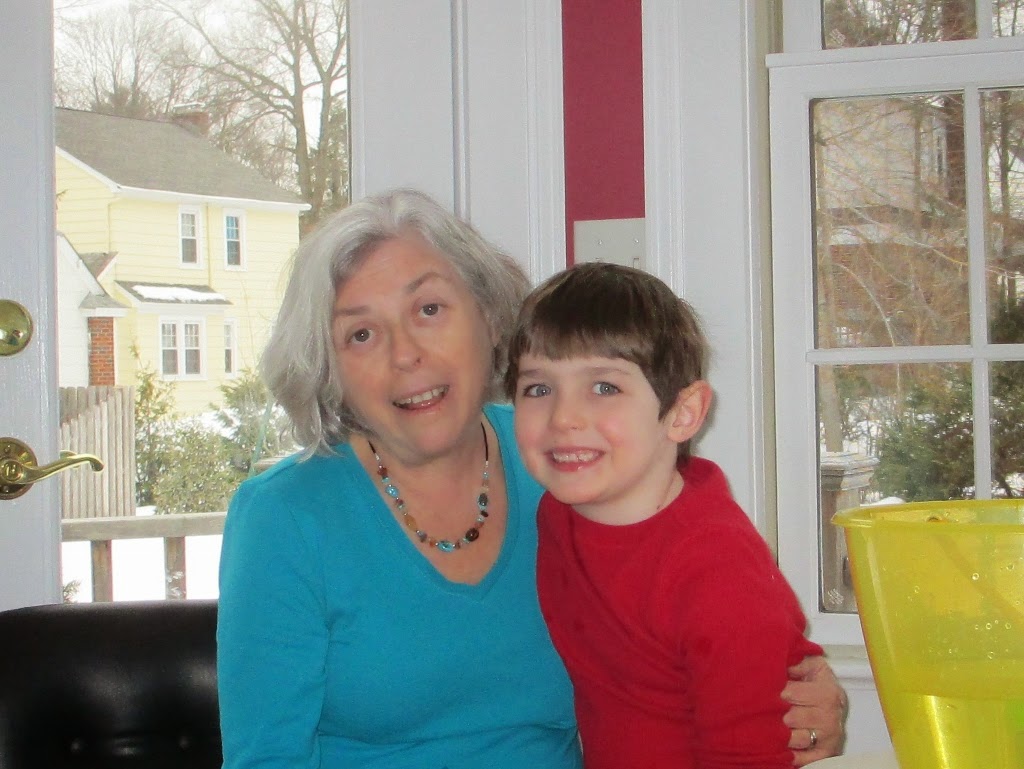 Have you ever felt that you are better at something with your grandchildren than you were with your own kids?  I had that positive senior moment this morning with my five year old grandson, Zach.

We have a standing sleepover date on the Saturday night before the first Sunday of the month.  On the first Sunday, our church has a family service.  There is no church school, the kids are in church for the whole service and our pastor invites the kids to the altar steps where she includes them in an interactive way during the sermon.  Zach likes to come to church with me on these Sundays and he particularly likes going to coffee hour in the parish hall afterwards.
My son was always a problem in church as a young child.  He would not sit still and keeping him quiet was a project.  Either my husband or I frequently would have to leave the service with him for a while.  I remember a father of 2 older boys telling me not to worry – “they grow out of it.”  And yes they do.  My grandson is a different child than my son was but I think I am also doing a better job with him and this whole issue of getting a little boy to behave in church.

First of all – I make sure we are always five minutes early and have a chance to settle in before the service begins.  This morning when Zach asked me if it would be long, I looked at the bulletin/service order in my hand and showed it to him.  “We will have to read all of this and sing some hymns so it won’t be short,”  I said, adding,  “There are two parts.  In the beginning there are readings we listen to and music.  Then you go up to the altar for the sermon.  After that you should watch as the priest prepares the communion and we will go up together to receive communion.  Then we’ll sing one last hymn and go to coffee hour.”  He flipped through the service order and said,  “It will be long to read all this.”  I braced myself - but there was no need.

At the Peace I told Zach that people would want to shake his hand and say Peace and sure enough he exchanged the Peace as many people approached him.  Before we said the Our Father, I told him this would be the prayer we said at bedtime.  And when I was looking for the Lift EveryVoice and Sing hymnal, he found it on the lower hymnal rack for me.

I realized that when my son was young I concentrated on his behavior and used various techniques to have him behave enough that he didn’t embarrass me too much. It was more about me than him.  With Zach I have a different intention when I bring him to church.  I want to introduce him to our faith and hope he will learn values here that will stay with him for life.  By taking the time to talk with Zach about what to expect and breaking the service into parts he would recognize it helped him.  He did have a quiet toy to play with and sometimes he played with it –especially during the hymns, but other times he watched and listened.

This is a lesson learned for me and it happened by serendipity.  Once I answered the question, “Will this be long?”,  I sort of got into explaining more.  If you want to share something with a young child who might have difficulty giving it attention, there may be something here of help – whether you are a grandparent, parent, aunt, uncle or adult friend.

Do you have something you do better as a grandparent than you did as a parent?  Please leave a comment and share with us.

Tiffany {A Touch of Grace} said...

My parents both say being grandparents is way more fun than being parents. They love spending time with our daughter. We aren't to the sleep over stage yet, but I think we're all looking forward to that stage. :)

Thanks for linking up at the Shine Blog Hop!

Thankfully, there are a variety of things that I do better than when I was younger. I am more organized, more tolerant, more relaxed and so much more. Some things really are better with age. I just wish that I had the same energy level of years past.

Thank you for adding your wonderful blog to the Granny Blog List. I look forward to your posts.