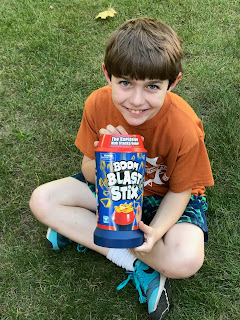 game.  He said he had seen it advertised a hundred times and it was really cool.  Little did we know how cool until we played the game.  This weekend the weather was like summer in New Jersey and we were enjoying being outside in late October. So we decided to play on our porch rather than indoors.  Although it is perfectly safe to play this indoors, it really lent itself to a larger outdoor space.


This is a simple game, lots of fun and although it is actually quiet the people playing it will be screaming and laughing – guaranteed.  So I don’t recommend playing it when you have a sleeping baby nearby that you don’t want to wake. 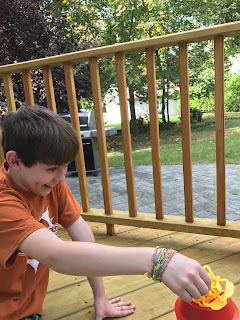 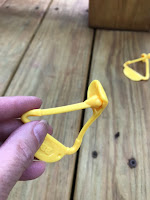 Boom Blast Stix is a cylindrical box with 32 stix and the lid doubles as the playing field.  The lid is slightly concave in shape and can be put on a flat surface or kept on top of the box.  The “stix” piece is open at one end and triangular shaped.  Each player closes the light weight piece and stacks one on the lid in turn. Before you know it, the pieces all open and explode into the air.  You just don’t see it coming.  There are no batteries, electronics or loud noise.  But the players provide the explosive noise when taken by surprise and the pieces go flying. And I mean flying.  They are very lightweight and won’t cause any damage but they can go quite high in the air.  They routinely flew over the banister on our porch and onto the patio. 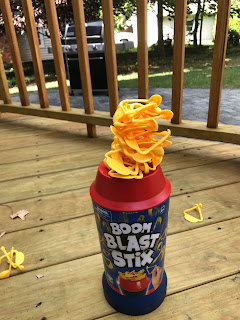 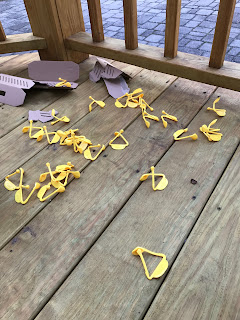 This game is very easy to play and it is suggested for 6 and up.  I think that is a good guideline.  As the package says, it is an explosive game for those with a gentle touch and nerves of steel.  Let me translate – should have good fine motor skills, like suspense and not be upset when you put your stix on the tower and every piece blasts apart and goes up in the air.  So while the game is a blast for 6 year olds it may cause tears in a preschooler.


Theoretically, you lose if the tower explodes on your turn.  But you feel like a winner for having caused the explosion – not a loser.  My grandson and I played this for over an hour and neither one of us was bored.  I can highly recommend Boom Blast Stix.  The kids will enjoy it and so will you.  No batteries, no electronics and not easily breakable this is the type of game that will be a family favorite for years. 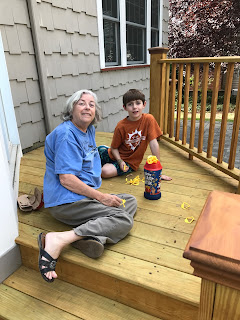 It is reasonably priced and available at Amazon and in stores.  Click below to order at Amazon.

My grandsons would LOVE to be losers in this game! :-D Sounds like great fun. Thank you for sharing in the GRAND Social link party!