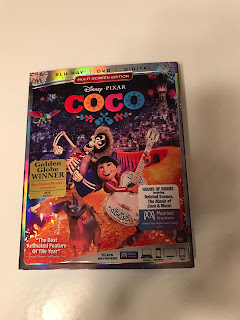 COCO, a Disney-Pixar production, is now available in DVD, Blu-Ray, and Digital formats. This colorful, musical adventure encompasses both a multigenerational family theme and a Mexican cultural theme.
To sum up the critical acclaim for this movie it is the winner of the Golden Globe and Oscar awards (Just now!) for the Best Animated Feature of the Year.  My review copy is a multi-screen edition which includes all three formats plus over two hours of bonus material including deleted scenes, music, commentary and more.
On Saturday I was lucky enough to watch COCO with my young grandson.  I was a little concerned about the Dia de los Muertos (Day of the Dead) theme but it was absolutely no problem.  It was handled so well that even a small child enjoys and is in awe as the main character, Miguel is transported into a fantasy world of his ancestors. The story is rich with details of Mexican folklore, family traditions, music, art, celebrations, culture and more.  It is a heartfelt story as a young boy who wants to be a musician overcomes his parents’ and grandparents’ objections by finding his ancestor’s musical connections.
This trailer will give you a taste of what to expect from the movie.

Like many Disney-Pixar productions this thrilling adventure of a film will be enjoyed by adults as well of the children.  Buy  the Blu-ray/DVD/Digital format edition at Amazon now by clicking on the image below.  It is also available in 4K Ultra HD.

Note: The Amazon image says Blu-ray but when you click on it you will see that it has all 3 formats - DVD and Digital plus Blu-ray.
Posted by Marion Conway at 10:55 PM