Jurassic World and Even More Dinosaurs

Update on 7/15/18 to include Amazon product links.


I will be writing five – yes, five -  blog posts about Toy Fair NY 2018 and the categories will be:


•   My Favorite Dolls and Plush

The Jurassic World theme is so big that it deserves its own category.  It seems like ALL of the big companies will have either Jurassic World or dinosaur theme toy releases to compliment the expected blockbuster movie. Jurassic World: Fallen Kingdom will be released in June.  Grandparents – it is time to brush up on your dinosaur and Jurassic knowledge, it is going to come roaring in like the nor’easter storm that just ravaged us here in New Jersey.


Besides Toy Fair, I attended a special Universal showcase at the Copacabana rooftop venue featuring everything Jurassic World so there are some “extras” in this preview.

Important Note:  The pictures are all my own from the displays I saw – no stock photos here – just the real thing.  Some of the items not out on the market yet, and so I can’t offer a link for purchase right now.

This huge TRex is the star of Jurassic World and she was the star of the Universal show. At over 3 feet long she towered over the other toys on display – one might say rightfully so.  The demonstration of the articulated jaws, eating and then “passing” this human figure drew a crowd. Listed at $54.99 and is already available at Amazon. 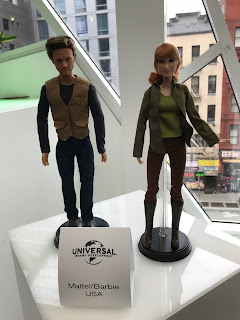 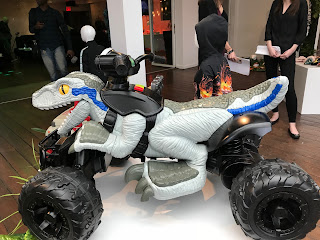 How about powering up this beauty instead of a traditional Jeep.  Oh they have the Jurassic version of that too.

LEGO
LEGO already had a popular Jurassic theme line and it will expand with 13 new construction sets associated with the movie across its lines.  Here are a couple that I have pictures of from Toy Fair.

This is a large Jurassic World theme set that is due out in April and features the Lockwood Estate and five minifigures.  Priced at $130, it is for older kids and adult LEGO fans.  Even with this price tag, I bet it sells out. 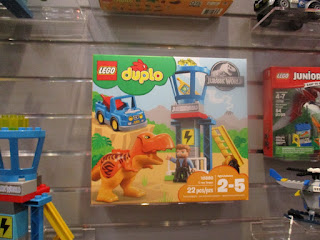 Toddlers and their parents can build this set together, which features a T. rex with opening jaw, revolving lookout tower, car and an Owen LEGO® DUPLO® figure. 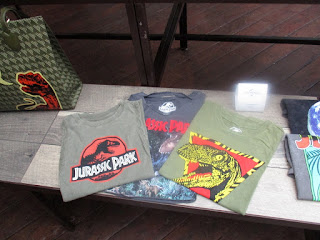 The tee shirts are already stocked and more patterns are on the way.  Available on Amazon and at Forever 21. 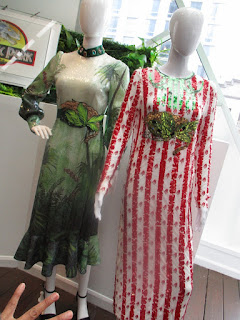 I don't have the designer information about these dresses in my notes but take my word for it - they are probably not in your budget.  Certainly not in mine. 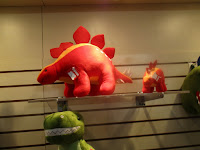 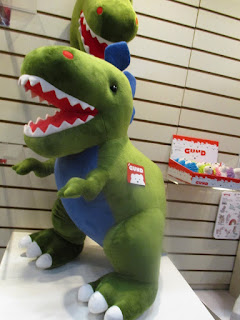 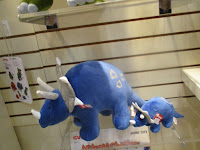 These soft, bright dinosaurs by GUND will let even the youngest family members join in the hottest theme of the year. 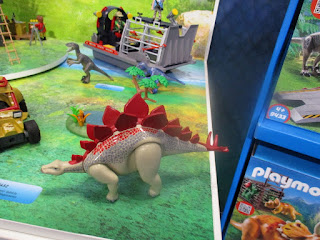 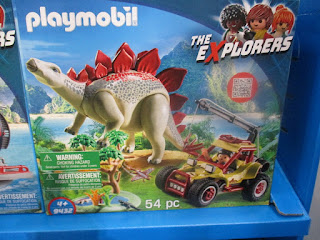 This is not a Jurassic World set, but it is an excellent playmobil quality dinosaur playset.  In addition to the dinosaur it includes the explorer vehicle with a functioning winch and crane, a figure, pond, tree and accessories.


Well that is enough about Jurassic World and dinosaurs.  Not much is available just yet.  I will add links to Amazon as products become available

Posted by Marion Conway at 8:44 PM